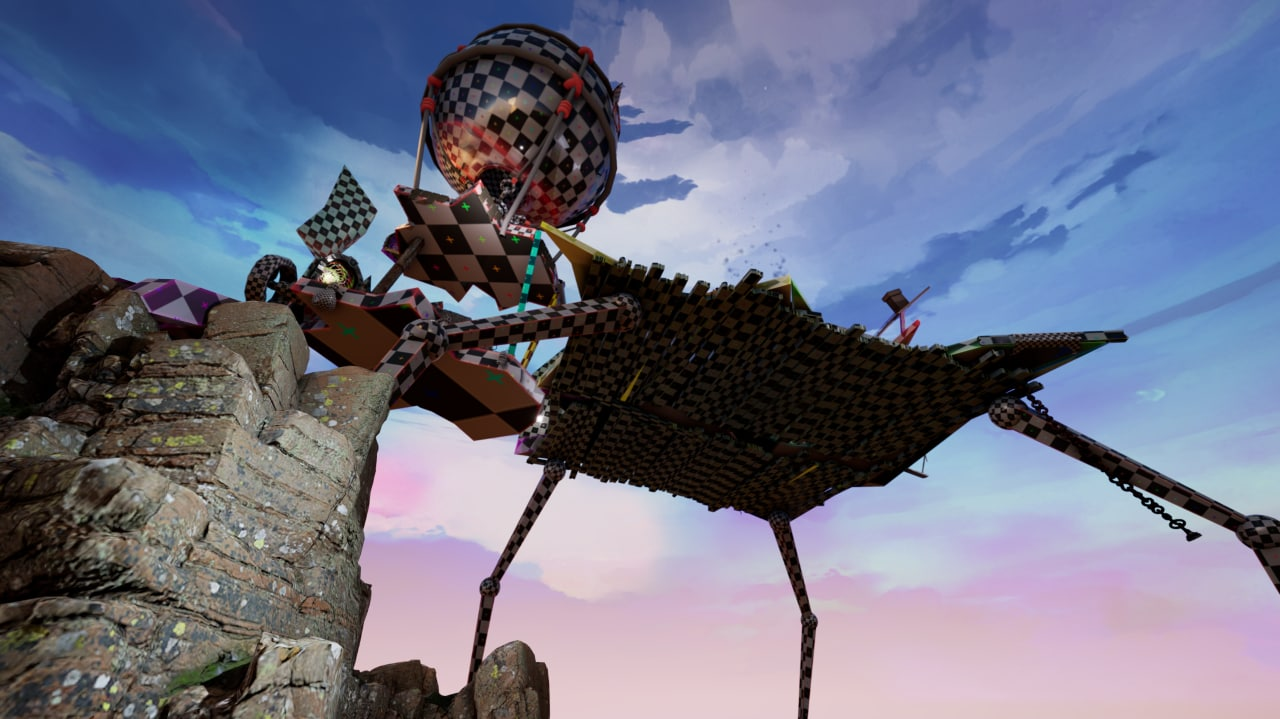 A Moving Castle—as popularised by Studio Ghibli’s cult movie “Howl’s Moving Castle”, based on Diana Wynne Jones’ 1986 book of the same title—is a nomadic patchwork of different spaces of mutating and incoherent scale. Such spaces are “bespelled to hold together” by the will of their inhabitants, which the Moving Castle can transport to different worlds in times of need or wish.

We are part of Trust, a knowledge-community that lives on a member-restricted Discord. The focus over the last year has been on producing online events which take shape as Collective Reading Groups, Sandbox (a combined voice and chat presentation format) and publicly available streams and talks on Twitch.

What we believe to be most promising about emerging spaces like Trust is their potential to grow into collectively-owned social and cultural institutions built on decentralised infrastructure: democratically governed manifestations of collective interest ranging from political aims to fandoms, contributed to and run by their members. To support this vision, we propose Moving Castles as an organisational metaphor and a type of media.

Moving Castles as organisational metaphor tries to counter the current neo-feudal trend within online communities, a trend reflected in many communities now using the term ‘dark forest’ – first applied to online communities by Yancey Strickler – to self-describe. According to his definition these are “spaces where depressurized conversation is possible because of their non-indexed, non-optimized, and non-gamified environments”.

Thinking about these communities as isolated islands or dark forests sits uneasily with both our experience of participating in Trust, and our hopes for these spaces developing into democratic social institutions which have a relationship and responsibility to the public. As a recent post by Laura Lotti, Sam Hart and Toby Shorin points out, we need new articulations of how decentralised online communities interact with the public, and attached conceptions of the public good, one that as they put forward, should to be framed around positive externalities rather than internal interests. Therefore we believe there is a risk for communities embracing isolating metaphors such as the Dark Forest.

Such an embrace could lead to these communities developing similarly to the historical precedent of merchant guilds: rent-seeking online tribes that optimize for internal value creation but with little to no concept of responsibility to the outside and an understanding of collectivity that only includes and reinforces the (often financial) interests of our the own tribe. All, ironically, under the false belief that these new echo chambers are somehow a valid form of political or social engagement.

To practically support the development of Moving Castles as an alternative, we are developing a toolkit that can be used to construct one of the many needed media formats that allow communities to interact with groups outside of their inner circle without the reduction of collective agency.

Certain types of media are ideal for stadiums that have influencers at the heart of their activity, and some media forms are better suited to decentralised institutions with many contributors. We call these centralising media types “Clearnet Stadiums”. Moving Castles is an alternative to Clearnet Stadiums which combines public visibility and participation with collective agency and interaction.

Moving Castles are modular and portable multiplayer miniverses; inhabited by communities that use them to manage their lore, ecosystems and economies. They will be built through a number of modular services that can be recombined by communities as they desire. Moving Castles are per design public, they are stages and games where those outside and inside the group can interact and participate. As the resulting Moving Castles will be interoperable they can form the basis of a network of such communities. A federated public sphere made up of a network of modular miniverses: a new public good.

Towards this goal, and to not replicate the centralising tendencies of Clearnet Stadiums, the design of Moving Castles must reflect the following principles.

Each moving castle is a miniverse inhabited and controlled by a community. Compared to the generalized idea of the metaverse in which one persistent & shared virtual reality allows for much less customisation on a community level, a miniverse is flexible, adaptable and agile. In this way, a Moving Castle’s structure can be thought of as a mix of a Discord server and a Massive Multiplayer Online game (MMO).

In Wynne-Jones’ book (and in Miyazaki’s movie) the doors of the Moving Castle are portals that lead to a variety of changing worlds and contexts. In our miniverse, the doors enable a variety of changing inputs and outputs, from APIs to communication with other Moving Castles. For example, doors that enable web3 integration would allow Moving Castles to become a representative media of DAOs and Multisigs, controlled by members with the inclusion and visualisation of financial mechanisms and the ability to read and write directly from and to permissionless ledgers. By integrating subscriptions or token access for roles, it becomes possible to circumvent services like Patreon and  Twitch subscriptions to source funds, while also allowing far greater portability to future decentralised alternatives (that are already emerging). Other doors could lead to friendly communities, allowing free movement of users,

Full customisability is achieved by using real-time rendering softwares, such as Unreal Engine. These allow the community to commission, create or reshape the components of their Moving Castle themselves. As a result, Moving Castles are not hermetically sealed, self-ossifying spaces, but instead can be swapped, combined and merged in a modular fashion. This scrappy, constantly re-assembling amalgamation of rooms, mechanisms, community members and portal doors is what we define as a Moving Castle.

Moving Castles float in the intertidal zone between public and private waters while providing tools for portable self organisation. By adding more functionalities to Moving Castles, and combining them using our modular structures, we hope to see a Cambrian explosion of new egregores—monsters, biospheres, mega-cities, flying machines and vehicles— all built for specific goals and governed by their respective communities and stakeholders. This in turn can lay the foundation for a network of interoperable Moving Castles, all communicating, playing games and bumping into each other – steered by the shouts of their respective communities.

Having now sketched out our vision for what Moving Castles could be, we now turn to the question of how to bring them into existence.

Kitbashed castles in the sky

Over the past year, we produced a series of live streamed media experiments to test the framework of Moving Castles and develop foundational layers of their infrastructure. Developed using Unreal Engine and hosted on Twitch, our Mascot Streams explored new types of collective agency and encouraged community participation using game design and interactive mechanics.

Our Mascot Streams mixed elements of game shows, reading groups and networked knowledge production, all facilitated in a 3D game world by a motion captured mascot. The audience could interact with and control objects, avatars and environments through chat-inputs in real-time. Each stream was a different experiment in interaction design, aimed at allowing for collective involvement in play and worldbuilding through Twitch.

Our streams drew inspiration from a broader current of social experiments such as Twitch Plays Pokémon, created by an anonymous Australian programmer in 2014, in which Twitch-users control a character writing game-inputs directly into the chat collectively puppeteering the gameplay through a very crude form of direct democracy known as anarchy mode. Twitch Plays Pokémon demonstrates how game design that facilitates collective coordination can create alternatives to centralised and authored narratives.

We also look at Hugo, a Danish TV series from the 90s, which combined video game consoles, national TV and landline phones to create a new hybrid format. This kitbashed infrastructure enabled an audience of young gamers to call in via land-line and control a live-streamed game on their TV using their phones as remote gamepads, enabling the interaction with an not-yet manifested future of online games.

We propose to kitbash Moving Castles using a similar form of hybrid media that combines live-streaming with game engines. The resulting miniverses are small and independent worlds inhabited and used by communities which already today accept the tradeoffs of simple- and high-latency inputs in favour of customisable, fun, and participatory media. We believe these streams can point at how decentralised narrative production can bridge false divisions between content-consumers and creators by rethinking how media can be produced collectively.

Our experiments thus far, have barely scratched the surface of the new types of narrative works that combine low-barrier public participation with collective agency. At this early stage we also see a contribution in framing the term, conducting public experiments to see what is possible and documenting the findings for other communities to use and hopefully take inspiration from.

Gitcoin was founded in 2017 with the mission to build and sustain digital public goods. While there are a number of podcasts and blog posts written about why