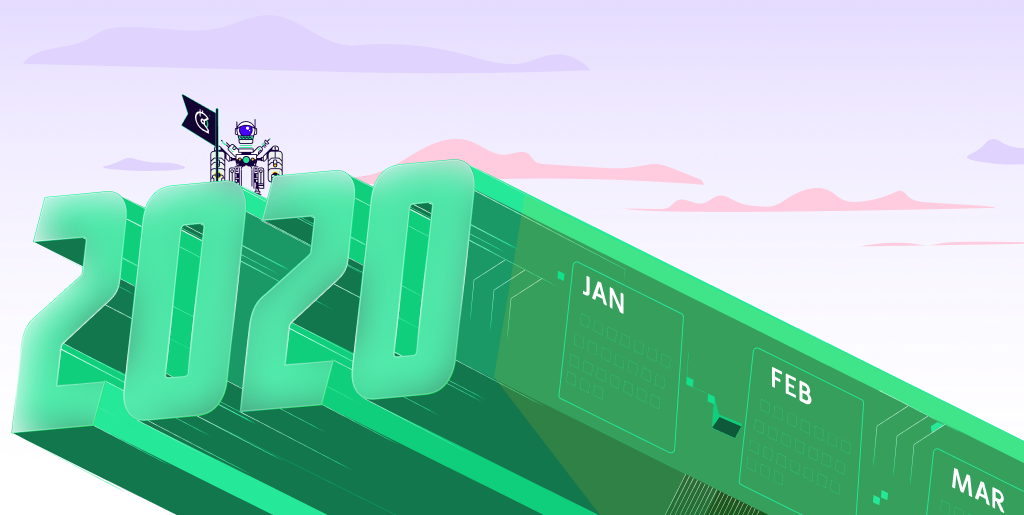 Saying that 2020 has been a chaotic year would be an understatement, but it’s also been a year of hope for creators and for the open internet.

With so many of us in the Gitcoin community stuck at home, we’ve started to see real potential for a future where anyone can work with people they love, on projects they care about, for currencies that align with their values. The pandemic hasn’t stopped us, and in some cases it’s enabled more creativity.

As always with Gitcoin, the year was full of experiments, some successful and some not. We’re proud of what we accomplished and excited to take what we learned into 2021.

– 41 hackathons with 100+ sponsors, almost 8k hackers and over $1M in prizes distributed

– 3 major fellowships including the next-level experience provided by KERNEL

None of this could be possible without all of the support from our community, including all of you reading this now – thank you.

Though we’re really proud of the numbers above, what we found really special about this year can’t be captured by the numbers alone. It’s been incredible to see the diversity and impact of the projects the community has been working on. So, in that spirit, each of the sections below also highlights some of the amazing people, projects, and events we think really stood out this year.

It’s seldom said but grants are the lifeblood of our ecosystem, whether they’re funded by us, by the Ethereum Foundation’s Ecosystem Support Program, by MetaCartel, or more recently by Fair Launch or CLR Fund. Many of the projects we know and love today started out as grants back when they didn’t have the same clout or traction they have today (including some of the above public goods funding mechanisms). Here are a few grants success stories we want to highlight from 2020.

These are of course a few of many. If your project is missing from this list, send us a note at founders@gitcoin.co and we’ll make sure it’s included.

2020 saw the reemergence of the Funders League, a group of projects and individuals dedicated to funding Ethereum public goods in a decentralized fashion, investing over $3MM in public goods. The idea was actually put together by James Duncan, Ken Ng, and Scott Moore as early as 2018 outside the context of Gitcoin Grants, but the power of quadratic funding really allowed it to take off.

At first, it started with the Ethereum Foundation and shortly after Jinglan Wang and the Optimism team (then Plasma Group) joined in (and we can’t thank them enough for being the first company to step up). Then like many things, after starting slowly it happened all at once. Specifically, with this tweet from Andre at YFI: 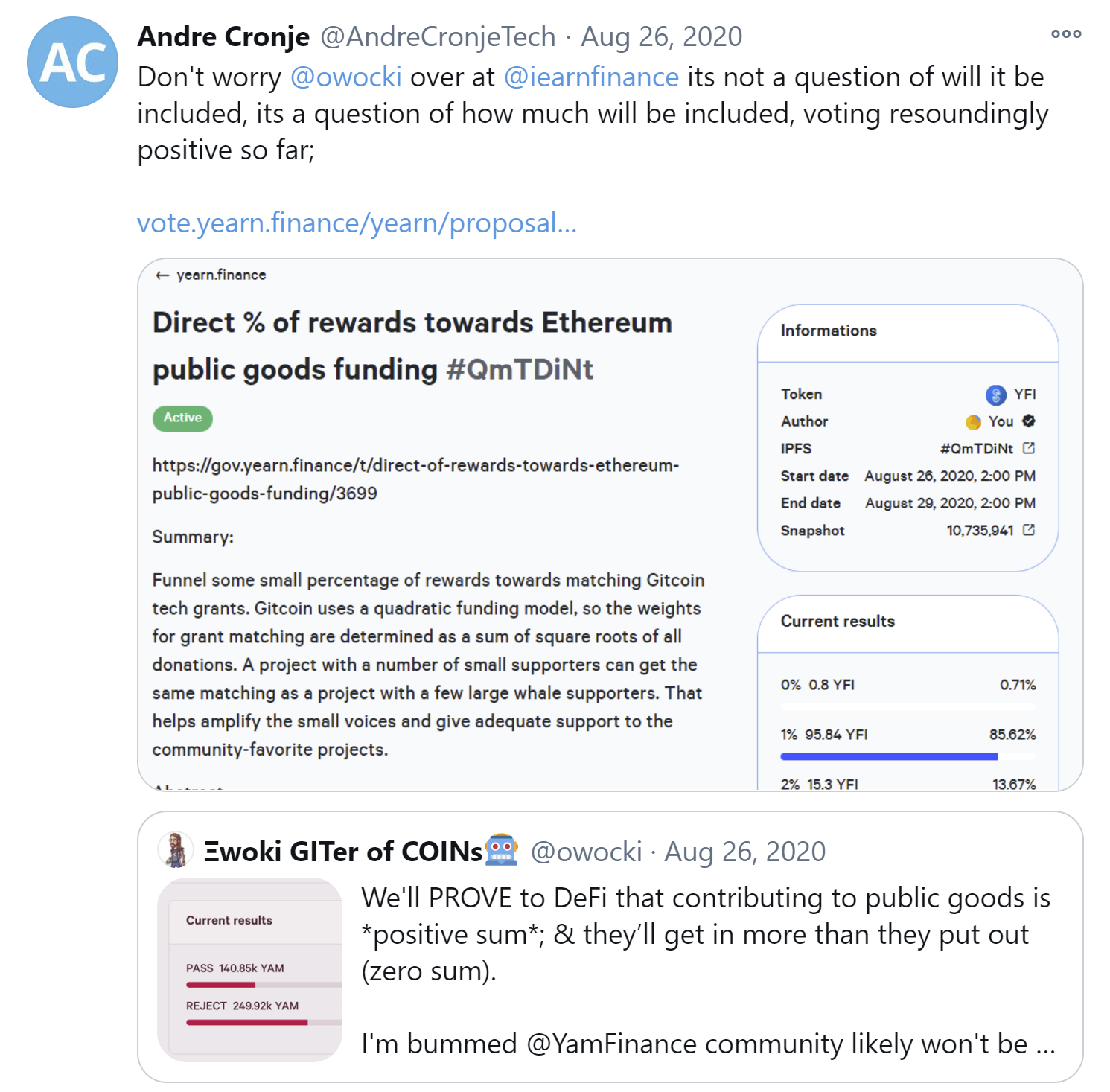 And the interest in joining the Funders League, being part of The Citadel, continues to pour in. If you want to be a matching funder in some of our 2021 rounds, please reach out or fund the matching round directly here.

In 2017, Gitcoin started as a bounties platform in order to allow developers to focus on participation in crypto networks, not speculation. But although our original vision was to allow devs to build features or fix bugs for existing projects, it slowly evolved into a way to grow ecosystems by allowing devs to create their own. Hunters became hackers and started building new dapps that would become mainstays of our ecosystem over the next couple of years. Here are just a few of our favourite hackathon moments from 2020:

Overall, we’re continuously amazed by all of the hackers who attended our events to help build the web3 vision. Special shout out to projects like Idle Finance from our 2019 hackathons who have now gone on to become key community members, and to our team, especially Connor O’Day, for helping all of our hackers find their place in our community.

In summer 2020, we announced KERNEL, an 8 week fellowship program. The Genesis Block had over 200 fellows from 48 countries representing all walks of web3 life. Unlike hackathons which can feel like they’re over in an instant, we wanted to allow more time to foster intimate peer-to-peer experiences and allow fellows to build long-term projects and relationships.

A select group of KERNEL Fellows can be found below, but you can learn more on how KERNEL works here.

The KERNEL program was a huge success with student and mentor reviews praising the experience of coming together to learn about open-source distributed values. Investors also saw some significant benefits in terms of deal flow as over 15 projects raised over $5M in total after the block came to an end. Here are some of the ones that stood out across various stages and levels of funding:

We’ll be running three KERNEL Blocks in 2021, beginning with Block II in January. The goal of each block is broader than building any company, and has deep roots in open source and peer-to-peer cultures of the past, both inside and outside of technology. It is a true community effort, with support from peer mentors and sponsors from across the ecosystem.

By connecting KERNEL Fellows with the best minds we know to teach us practical thinking skills, combined with effective patterns for using innovative tools and creating decentralized solutions, we aim to live alongside KERNEL Fellows as we explore new ways of living, building, and connecting in Web 3, day by digital day.

A huge shoutout to Andy Tudhope, author of the KERNEL Syllabus, our KERNEL Mentors, and of course, the KERNEL Fellows themselves. This is just the beginning.

2020 has been a year of learning for web3 in general. Both for the grantees and donors, hackers and sponsors, mentors and fellows in our community, and for us. Here are just some of our key takeaways from working with the amazing people above:

We’ve been really proud to be able to call web3 home for the last 3 years, and we’re excited to make it our home for well over 3 more. Crypto enables anyone to work for the open internet, including you, so if you haven’t already, we hope you’ll join us in 2021.

To the Ethereum community,

Today, we’re excited to announce the latest round of Gitcoin Grants. Over the past...