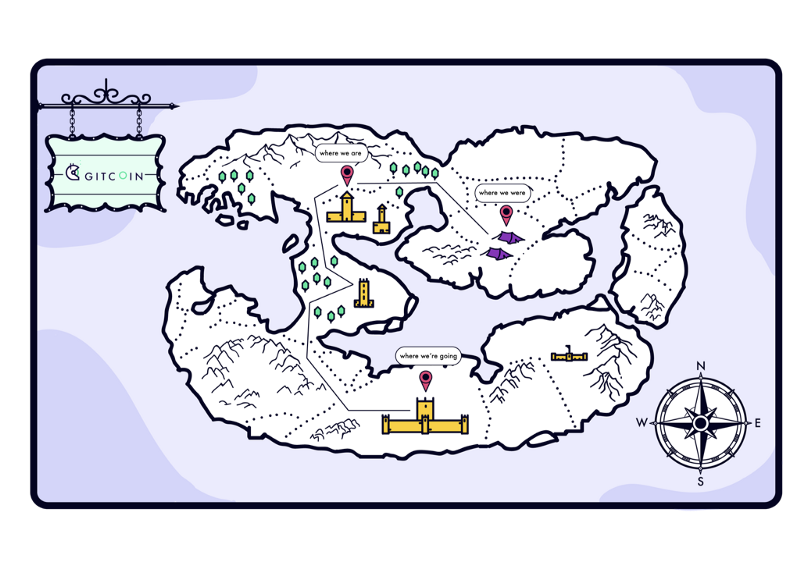 A wave of open source cryptoassets is sweeping the world. The blockchain revolution, led by projects like Bitcoin and Ethereum, have ushered in fresh enthusiasm to conversations on the intersection of technology, monetary policy, social impact, and governance.

First, why is blockchain even interesting? To answer briefly, we’ll summarize by analogy.

The internet represents a suite of revolutionary protocols for transmitting information across the world. Over the last 30 years it has completely transformed the way society functions. In doing so, it has transformed business, media, politics, and interpersonal relationships.

Our friends over at Origin Protocol made this beautiful graph that shows the evolution of the network application (y axis) over time (x axis).

The above chart denotes that in the future, the data layer will be open and portable between apps.

The portability of data is important because it means that your data will be easily moved between different complimentary apps. As opposed to Web 2.0 — where your social data is tied to Facebook, your email is tied to Gmail and switching costs are high — applications will be based upon shared data layers in the blockchain enabled, interoperable future.

We are not not just “talking the talk” here. Gitcoin’s Issue Explorer is based upon an open standard for bounties, called Standard Bounties. We are already interoperable with Bounties Network and plan on becoming interoperable with one of the other major players in the space; Status Open Bounties.

Now that we’ve discussed why we believe open systems will win, we will dive into how these open systems also bring a breath of fresh air into the ecosystem: open source money.

Open source has been an unequivocally good thing for the world — powering hundreds of billions of dollars per year in economic output.

However, those who contribute to open source software have not been properly incentivized for their time and effort.

If you’ve been following our Grow Open Source series, you’re aware of this storied history. From the Free Software Movement led by Richard Stallman, to The Cathedral & The Bazaar by Eric Raymond, the history of open source is colorful. It shows generations of individuals who worked together to bring us to today’s technological world.

Despite the economic value they create, open source software developers have not always been compensated fairly. They often have to do their work on nights and weekends — or, if lucky, through corporate sponsorship.

We believe the blockchain revolution marks a unique time in the history of open source software. To speak of Bitcoin, Ethereum, or other open, transnational, immutable cryptocurrency is to be philosophically aligned with their open source design.

Open source blockchain systems are capturing more of the value that they create. Thus, structural issues with open source funding are being addressed in blockchain ecosystems.

Amongst the noise of thousands of ICO’s, the cream of the cryptocrop is rising. At the time of writing, the combined value of Bitcoin and Ethereum’s open networks stands at over $200 billion. The top five projects in the blockchain ecosystem are all open source. “Open” serves as a beacon of strength.

Technologists are taking note of the opportunity that this creates. For the first time, incentives to maintain open systems are becoming the norm. It is a golden age for open systems.

One of the problems we have had in tech is that there aren’t large monetary incentives to create and sustain open protocols. If they are open they cannot be easily monetized by traditional means. However, that is changing with the emergence of blockchain technology and crypto-tokens. — Fred Wilson, The Golden Age of Open Protocols

A World on Open Source Jobs

Just to illustrate how important Open Source Jobs are to the future of the web, let me paint a picture of what a world of OSS jobs could do.

In the future, you could have an open source version of Gmail that’s as high fidelity as Gmail itself, but without the surveillance business model.

In the future, you could have an open source version of Facebook that works just as well as Facebook, but with data portability.

In efforts to grow open source, Gitcoin experiments with different incentivization techniques. This begins with our premier product, the Issue Explorer, and trickles down to experiments we are testing which align with our mission. We’ll outline a few key examples below.

Gitcoin is a double sided marketplace that matches employers with talent.

Using Gitcoin, employers can find talented individuals to work on their problems and incentivize them to help grow their projects with bounties.

Using Gitcoin, talent can find work at the intersection of blockchain and OSS. They can find a community that cares about building (not speculation)and build relationships and products that positively impact their ability to find work in the blockchain space.

We’ve seen much success with the bounties platform. $30K of work has made it through the platform in the last 4 months on leading projects like Augur, MetaMask, Truffle, Solidity, ETHGasStation, and many others (see more).

Powered by StakeTree’s smart contracts, developers can receive recurring funding in any ETH or ERC20 token on a monthly or weekly basis.

Imagine a dev receiving a $800 monthly grant to spend 8 hours on an open source project.

CodeFund is a platform that matches open source software developers to advertisers who want to reach their audience. Using CodeFund, developers can monetize their work in open source and sustain their ability to focus on the project full time.

We believe finding work in Open Source Software will be as easy as it is for Uber drivers to find a ride today.

The future jobs economy will be more fluid and liquid than today’s economy. This will change the nature of the relationship between capital and labor.

In the old model, a corporation’s relationship to its employees would be 1-to-many. In the future, the relationship will increasingly be many-to-many.

Projecting the Gitcoin model of ‘many-to-many jobs’ forward, one could imagine a future where jobs are ‘many-to-many’ across the entire OSS ecosystem, with actors in the network playing the role of capital and labour in different situations.

This would be a mesh network of jobs.

We expect that great software engineers will create bidding wars for their time because they’ll have multiple clients at once, from which they can take the highest price from each. This will create an inverse bell curve distribution of compensation.

Software being a key strategic advantage in many fields, developers can create leverage based on the following:

The law of software monetization will be augmented in blockchain’s open network model. No one wants to pay for open source until they have a problem. Then, they’ll pay anything.

“Live in the future, then build what’s missing.” — PG

If you agree with the worldview posited above, there are many opportunities to build this future.

Because the new economy of jobs is so networked and liquid, it means that Flash Organizations will be possible. Employees will work for several projects at once, and it will be possible to spin up a project, tokenize it with DAOStack, govern it with Aragon, manage compliance with Opolis, recruit engineers with Gitcoin, market it with CodeFund; and spin it down when the project is done.

Credit will be peer to peer. Everyone will have a bank in their pocket, and they’ be able to seamlessly lend assets to others in your network using smart contracts. You’ll be able to insure your project with the click of a button, and you’ll be able to tokenize your assets and distribute them to other organizations.

Because tokenization will be so pervasive, we believe that projects will sometimes pay their early team in a combination of salary and tokens (whether utility tokens, security tokens, or protocol tokens).

There are services that have been traditionally bundled with work. Things like retirement packages, healthcare, insurance, and vacation will shift to take new forms in this mesh-networked world.

This is both an opportunity and a threat for both capital and talent. There will be new opportunities for efficiency and customer service in this new world. It will also mean that there is a market price for stability and security that will be borne by some combination of capital and labour.

We are excited about what our friends over at Opolis are building in this space, and can’t wait to see them launch!

How do we get there?

It is our view that the future of the blockchain space is built upon an interoperable ecosystem of products. Our product is one that supports a new use case of finding and managing work.

There are many great projects explicitly building ‘the future of work’ alongside us, including Bounties Network, DaoStack, Opolis, Aragon, Colony, Status, Bounty 0x, and Origin Protocol. Many other projects are focused on key blockchain infrastructure which enables this level of interoperability.

As is the case with open source, we believe in meritocracy. There’s always room for fresh ideas! Join us on the journey to grow open source.

If you’d like to test drive a career on open source work, check out the Gitcoin Issue Explorer to get rolling. We’d be honored.

An initial $25K worth of Gitcoin bounties for Ethereum infrastructure projects

We’re excited to have been selected as an Ethereum Foundation grant cohort member this... 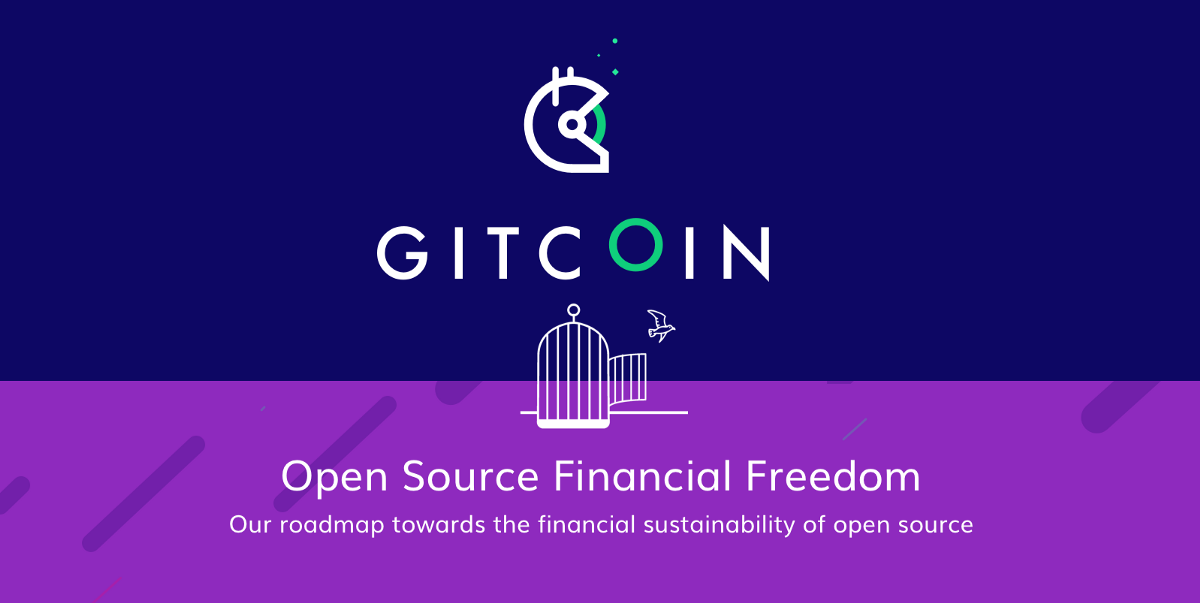 Our roadmap towards the financial sustainability of open source

Open source software has been an unequivocal good for the world. It produces billions of dollars a year...